When in doubt, try a different perspective.

These days, you can find my child up in a tree. She’s a climber. She’s always loved to climb rocks, hills, snow banks, and trees. She’s dreaming of a treehouse this year for her birthday in June. Right now she has 3 favorite trees to climb – Clarke and Jimmy, both apple trees and the arbor vitae next to the house. Though you can find her in the crook of the silver maple pretty often, too. She probably gets all this crazy climbing from her Dad. When I was little there weren’t too many climbing trees in my yard (though I was surrounded by woods) – I had a metal slide fitted into a pine tree that you could climb the ladder up one side and slide down the other through the tree, and at my Grandmother’s there was an old crabapple in the front yard that was split in two. The two big arms stretched out away from each other (and were held together at the base by a big metal chain) and I (and my mother before me) would climb up there to read in the elbow of one of the trunks. But that’s not really climbing.

I’m not a big physical risk taker – with my body, no skydiving or skiing for me. I’m not a fan of heights and get motion sickness in boats/cars/rides. I like my feet on the ground (my head in the clouds). But Josh loves all the crazy stuff – hot air balloon rides, whitewater rafting: he’d probably jump out of a perfectly good airplane. He loves carnival rides and would probably do para-sailing and dreams of a parallel life where he’s a monumental rock climber or surfer. One of his favorite things as a child was running up VT rivers on the rocks, up into the hills.

We both love to hike though we haven’t really hiked in years. We go for walks in the woods but it’s not nearly the same. We thought for sure we were going to hike the A.T. by the time we were 40 but then we got derailed by the child. We still fantasize about it – it’s still possible (though not recommended for her until she’s 12 or so) – maybe when it’s reopened.

Until then, she can practice on trees and in the woods. She keeps a sure footing – and that’s the key for all of us. Just putting one foot in front of the other, feeling as secure as we can before we take the next step. 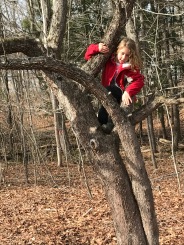 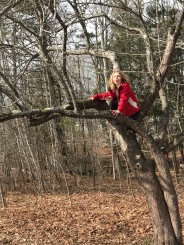 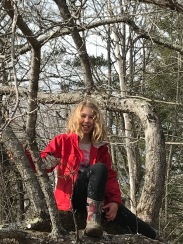 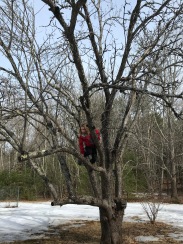 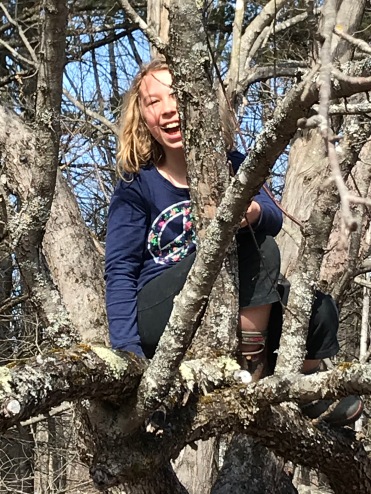 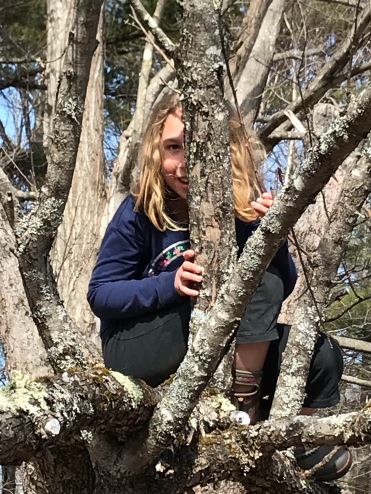 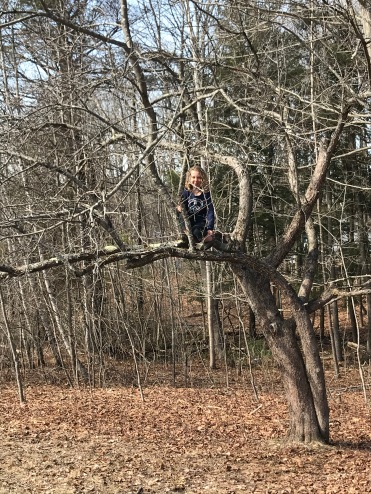